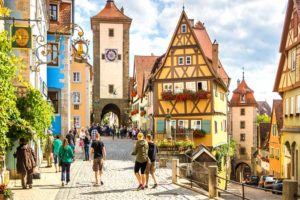 Traveling nowadays has become incredibly appealing for most people. Aside from dropping airfare tickets, it’s never been this easy to book your tickets online and make all the necessary preparations with just a few clicks of your mouse.  Here are a few must-visit places this year and suggestions on when to go for the most savings:

Sicily is definitely one of the must-visit destinations this year, especially for wine connoisseurs and enthusiasts alike. Apart from recently becoming one of the most prominent winemaking regions of Europe, its beaches have also started to gain worldwide recognition for being incredibly jaw-dropping and gorgeous.

While in Sicily, make sure to visit the nearby cities such as Syracuse, considered one of Italy’s main historic cities, and Palermo, famous for its historical markets.

The peak seasons are from May to June and from September to October. It’s best to go during July and August, as local hotel owners slash down their prices and offer very generous deals for their guests.

Beer lovers and partygoers will surely find themselves drawn to Bavaria this year, as 2016 marks the 500th anniversary of the Beer Purity Law. Yet, even if Oktoberfest seems to be incredibly fun in theory, it’s going to be a chaotic time to visit. Instead, make your way to Bavaria instead during spring or winter. Make sure to get a good tour of the many breweries in the area.

Aside from filling your itinerary with different breweries and watering holes, it’s also a good idea to do a historic tour of the castles, medieval towns and cathedrals in Bavaria. You can also drive down the 261-mile long Romantic Road to get a feel of the German countryside.

Before Fez becomes a mainstream tourist destination, now is the perfect time to visit the city. It is well-known for keeping true to its humble roots, what with its markets and merchant-filled alleys remaining unchanged since the 18th century. Apart from a cultural immersion filled with vibrant colors and lustrous textures, Fez is famous for its iconic blue doors and for building the world’s first university. Don’t be afraid to walk around its souks, explore its many tanneries and walk about aimlessly while getting lost in various colors, sounds and smells.

Morocco’s peak season is during the months of July to September. As these months are considered their summer season, not only are local tourists flocking to Fez this time of the year, it’s also considerably more humid and uncomfortable during this time of year. The whole year is generally sunny anyway, so it’s best to go on other months instead.

Ireland’s beautiful landscape has left many people breathless, and for good reason. Its medieval castles, rolling green hills and scenic coastlines have been featured in a number of popular movies such as Brave Heart, P.S. I Love You and Star Wars. Plus, it has been listed by Lonely Planet as one of the world’s friendliest countries to visit.

If you’re in Ireland, stop by Dublin and make sure to pay the St. James’s Gate Brewery, the Dublin Castle and Phoenix Park a visit. If you’re looking for a more outdoorsy excursion, best to make your way to the the Aran Islands and the Cliffs of Moher in County Clare and.

Ireland’s peak season runs from June to August, when the days are longer and the temperature is higher. Yet, as the winter can get cold and harsh in Ireland, it would be best to go during the spring or the fall for relatively good weather and average prices.

If you want to go and explore a buzzing metropolis, you can head to Taipei, or the capital of Taiwan, this year before it becomes as expensive as Hong Kong, Tokyo and Singapore. Like its more famous Asian counterparts, Taipei is also home to big shopping malls, giant skyscrapers and what was once the tallest building in the world until 2010. While you’re in the city, make sure to enjoy a sampling of their cuisine at Din Tai Fung, a Taiwanese-based dim sum chain, or at one of their numerous night markets for a more authentic dining experience.

The best time to visit Taipei is during their ghost month period of September to October. Although the actual dates of this religious tradition vary every year, these months are generally a blackout season for traveling among the local tourists. Apart from being able to avert big crowds, foreign tourists get to experience the city and their rituals, such as the burning of spirit money and dragon dances along the streets.

Although the earthquake that hit Nepal last year has damaged part of Kathmandu Valley, the Nepalese have striven to restore most of its historical buildings and the damaged roads. Truth is, Nepal is just as charming as ever, and there is no better time for foreign tourists to go there than now. After all, the country heavily relies on tourism to help rebuild the Nepal that they remember.

If you’re in Nepal, make sure to go to Chitwan National Park. You can ride an elephant while looking a Bengal tiger in the eyes. You can also trek the Gokyo Lakes and absorb breathtaking views of Mt. Everest. Prefer something more cultural? Visit the preserved historical city of Bhaktapur and admire the traditional alleyways and the ancient woodcarvings of their temples. You can also go shopping in the markets of Kathmandu in the morning, eat their traditional known as dish Dal Baht and chill in one of the bars while listening to Tibetan music in the evenings.

Listed above are only a few of the places you might want to check out for yourself this year. Wherever the wind takes you, always remember to prepare in advance, keep yourself safe, and bask in the experience. Whether you don’t make it to any of these destinations and you end up going somewhere else, as cliché as it may sound, it’s not the destination that matters anyway, but rather what you make out of the journey!