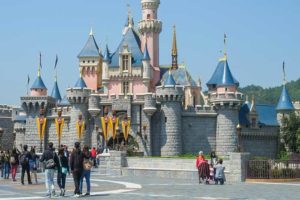 As Disney characters have always been a part of everyone’s childhood, its founder Walt Disney had a brilliant idea one day to build a Disney-themed park and bring the magic to life. Fast forward to this day, there are already five Disneyland locations all over the world and they don’t fall short at the original vision of Walt, which is to make it the happiest place on Earth, for both kids and adults alike!

Discover the nearest Disneyland location for you:

The original Disneyland was built in Anaheim, California. It is now home to two theme parks, three hotels and an entertainment complex known as Downtown Disney.

Located in Orlando, Florida, Walt Disney World is also called the Magic Kingdom. It opened way back in 1971 and is the largest Disneyland property built to date. Annually, it gets over 52 million visitors, making it the most visited vacation resort in the world, according to Forbes Magazine.

Located east of Tokyo in Urayasu, this is the first Disneyland built outside of the United States. It was built in 1983 and since then, has now expanded to two theme parks with three hotels and a shopping district. Most of the property is identical to the Disney Park in Anaheim. This means that Disney fans at the other end of the globe need not go far to experience the magic that Disneyland brings.

Established in 1992, Disneyland Paris remains the only Disneyland property in Europe. It became the most visited theme park in the continent since 1999, and has two separate parks also patterned after Anaheim’s Disneyland.

Located at the northeastern tip of Lantau Island in Hong Kong is the newest Disneyland. It officially opened on September 2015 and is a joint venture of the Government of Hong Kong and the Walt Disney Company in Hong Kong. It has a more local feel compared to other Disneyland properties, as its architects incorporated Chinese culture in the design of the park in order to avoid cultural backlash.

As Disneyland attracts billions of fans and theme park lovers every year, wherever you decide to go is bound to be teeming with people. Before you start queuing in one of those long lines at Disneyland, here are a few tips to remember to make the most of your visit:

As tickets for any Disneyland park can be bought online, you can save a lot of time by pre-purchasing a ticket in advance. Not only is it more convenient for you to do so, it also allows you more time to enjoy the park’s many rides and amenities. If you purchase a 3-day ticket or longer, you’re also entitled to one-day of early admission called Magic Morning. Better yet, purchase a yearly pass that allows you to go virtually any time of the year, without any hassles!

Staying close to the property means you get to avoid wasting time on traffic or scouring for parking. Disneyland parks have several hotels on the property for you to choose from. But, if you prefer to book something off the property, it is best to stay close. Time spent on traffic could have been time spent on one of the famous rides instead.

Remember that each park has over 50 attractions, and unless you have a general plan of how you want to tackle all these, you’ll end up wasting time bouncing from one part of the park to the other and back again.

A good place to start is to take into consideration the shows and parades you want to see. Build your itinerary around these shows, so you always know which area of the park you’d have to be at a certain time. Consider your mealtimes, as well, while making your itinerary. You wouldn’t want to deplete your energy without replenishing it throughout the day. It’s best to take your meals during off-peak hours, if you didn’t make reservations to avoid long lines.

In Disneyland, the early bird gets the worm. That’s because lines are shortest in the mornings and you’d get away with very short waiting times for the park’s most popular rides. The same principle applies if you want to catch the end-of-the-day fireworks display, which Disneyland is really known for.

No offense to those who aren’t too tall, but this one especially goes out to you. To save yourself a good spot, go to the area a little earlier than everyone else will. Turn off the flash of your camera while you’re waiting, so that you can take optimal photos if you wish to do so.

There’s no need to be fashionable for a trip to Disneyland. Comfort is key, as you will be doing lots of walking and waiting in line. Wear your most comfortable pair of jeans and a stretchy shirt that would serve you well, especially when you’re up in the air and inverted! It is best to take an extra set of clothes with you, in case you’re planning to enjoy any water-based attractions.

The souvenirs can wait until the end of the day, as shops close an hour after the park actually closes. Plus, you wouldn’t want to lug around any shopping bags with you, while you’re still going on rides anyway.

With these tips, not only are you now ready to meet your favorite Disney characters, you’re also more than ready to ride those badass roller coasters, as well. Remember not to lose yourself or your friends in the crowd though, as trying to find each other could be a pain and a terrible waste of time. It is best to hydrate yourself, too, as you go about your day. You don’t want to be running out of breath while you’re in the Happiest Place on Earth, wouldn’t you?